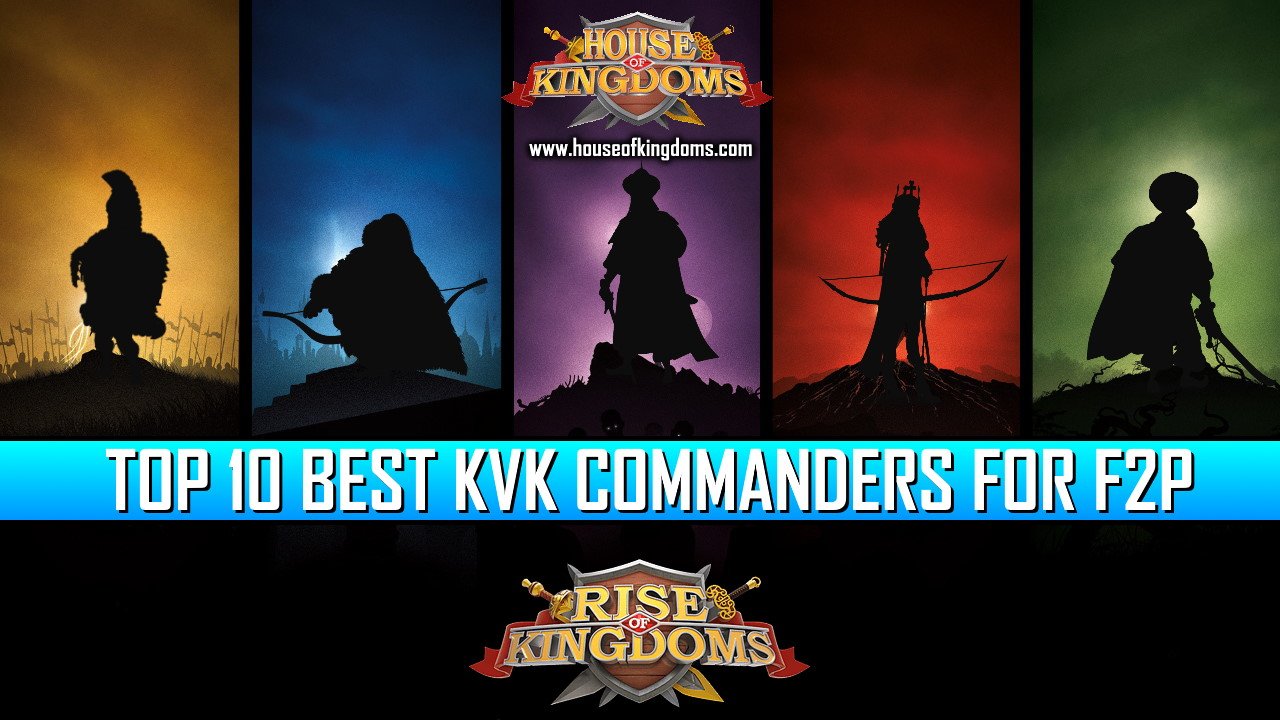 The most strongest KvK commander in Rise of Kingdoms is Harald Sigurdsson. He comes with a wide array of damage boosters that only makes him stronger the more enemies he fights against. His active skill deals quite a serious amount of damage towards one target but the damage increases as he fights against 3 enemies.

In addition to that, he is equipped with a powerful counterattack that does 20% increased damage. However, if he is fighting against 10 or more enemies, then his counterattack damage is increased to 40%. If you are looking for a powerful commander that will absolutely crush in massive PvP battles, Harald Sigurdsson is awesome legendary commander to have.

For best combat performance, I highly recommend pair Harald Sigurdsson with Sun Tzu, Guan Yu and even Alexander the Great. While Harald Sigurdsson is already a powerful offensive commander, you do need to keep an eye on his defense as it becomes weaker over the time the longer he goes into rampage.

Aethelflaed ranks as one of the best KvK commanders for F2P players. She is incredibly easy to get via Expedition Store and comes with several powerful skills, which includes reducing enemy attack, defense and health by 30%.

Additionally, she takes 20% less damage from counterattack and reduces their march speed by 30%. She has a small chance to activate it while actively attacking the enemy targets.

It is no wonder why she will easily excel in open-field battlefield thanks to her wide AoE active skill, which hits up to 5 targets in a fan-shaped. Aethelflaed is a preferred commander for F2P and doesn’t require too much time or resources to obtain her.

Why Aethelflaed is the Best KvK Commander?

If you are looking for a solid commander that is capable of dishing out heavy blows and commanding a large mixed army with high damage output. Hannibal Barca easily fit this role.

His active skill deals direct damage and an additional damage on the next turn upwards to three targets. Plus he reduces their damage and defense by 25%.

Whenever Hannibal Barca leads 3 or more troop types, he gains a 10% damage bonus. Furthermore, if he is battling outside of alliance territory, his damage gets further increased by 15%.

He is truly a beast on the battlefield with all these insane damage modifiers.

Why Hannibal Barca is the Best KvK Commander?

Mehmed II becomes available once your kingdom turns 120 days old. Although, he is one of the best KvK commanders in the game, mainly because of how good his active skill and passive skills really are.

He is equipped with some of the best passive skills which increases the damage of active skill, and the damage that troops deal. If you are commanding Mehmed II to battle against enemy garrisons and plunder their resources, this legendary commander will make quick work out of them.

So, if you are looking for a solid commander that can dish heavy blows towards multiple targets with ease, Mehmed II is your best option. Alternatively, you can roll with Baibars as he has a similar setup to Mehmed II and do slow down enemy targets thanks to Sandstorm.

Why Mehmed II is the Best KvK Commander?

Just like Mehmed II, Genghis Khan only can be unlocked after your kingdom turns 120 days old. Any player who wants a powerful nuker that can handle a single target quickly will want to have Genghis Khan.

He deals massive damage and has a 30% chance to activate his active skill for free at no additional cost to his rage. Genghis Khan is great for blowing past the enemy ranks with minimal effort.

Plus, if you want to be able to move around on the battlefield quickly, Genghis Khan focuses on cavalry and comes with a number of powerful bonuses that improve their health, attack and defense value as well as march speed. He is one of the fastest KvK commanders with massive single-target direct damage.

Why Genghis Khan is the Best KvK Commander?

Don’t underestimate Yi Seong-Gye for the fact that he is able to build his rage at neck-breaking speed thanks to his passive skills. Every time he attacks, he has a small chance to generate 100 rage. Plus his archers also have a chance to increase damage by 100%.

Despite the fact that he is suitable for garrison, his active skill deals massive damage and does in a circular area. One of the main advantages for playing this legendary commander is the 50% damage bonus to active skill.

Pair Yi Seong-Gye with any nukers, and they will just blow past them easily. An ultimate KvK commander who will decimate any enemy commanders on the battlefield.

Why Yi Seong-Gye is the Best KvK Commander?

Saladin is an excellent commander at harassing enemy forces thanks to his superior mobility and powerful direct damage factor. His active skill reduces their marching speed and healing effects by 50% for 5 seconds.

Just like other legendary commanders with cavalry specializations, Saladin is a very fast commander who will be able to reach their targets in a matter of seconds. Unlike other commanders, Saladin can keep their targets on lock-down and execute them to maximize the enemy’s losses.

Why Saladin is the Best KvK Commander?

This legendary commander is able to play on the battlefield dynamically by increasing the attack while shield is down and increasing defense when the shield is up. On the map, infantry gains 30% attack and march speed bonus which makes Alexander the Great a highly desired commander.

Why Alexander the Great is the Best Infantry Commander?

One of the best KvK commanders in the game is Hermann due to his ability to silence enemy commanders. He is considered one of the powerful silencers thanks to his lightning fast rage generation and the ability to prevent nukers from doing any significant damage.

To maximize Hermann combat capabilities for a near-full silence, you can pair him with Boudica.

Why Hermann is the Best KvK Commander?

If you don’t have Mehmed II in your roster yet, Baibars is one of the best KvK commanders and he is available at the start of the game if you play as Arabia. He is cavalry-focused which means he is packed with powerful offensive capabilities and speed.

One of the main advantages for playing Baibars on the battlefield is due to his active skill which deals moderate amounts of direct damage upwards to 5 targets and slows them down.

If you pair him with other splash damage commanders like Aethelflaed, then you can build a good AoE pair to do massive damage against multiple targets.

Why Baibars is the Best KvK Commander?

Osman I is a solid KvK commander and one of the starting choices for players who play as Ottomans. He is a strong alternative option to Mehmed II with similar skill set and abilities. Thanks to his active skill, he can dish out heavy direct damage.

In addition to that, one of his passive skills expands the troop capacity. Which means he can bring more troops and deal even more damage to cause enemy forces to suffer more casualties. A simple, yet easy commander to start with in KvK battles.

Julius Caesar and Scipio Africanus both are also good choices with similar skill sets to Osman I, except they are good at debuffing your enemy targets and buffing your troops to maximize troops’ damage.

Why Osman I is the Best KvK Commander?

Another F2P KvK commander is Pelagius who can be obtained if you pick Spain and via chests. He excels at speed and offense capabilities. When he uses his active skill, a portion of rage is restored. Plus, if you use the rage generation talent build, he will be able to use his active skill often which turns into higher damage output.

Not to forget to mention that his troops also have a small chance to activate healing for 400 per second. Which really helps out a lot with mitigating the damage from the opposing forces.

Why Pelagius is the Best KvK Commander?

That’s all Governors! I hope you find our top 10 best KvK commanders for F2P useful and informative. If you are new to the game, it will take a while to obtain these legendary commanders. But I can assure you they are the best KvK commanders in the game right now. I also would suggest you to learn how to get Tier 5 troops as fast as you can.